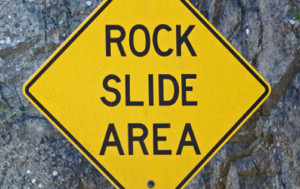 One of the most effective techniques for preventing the damage of rockfalls is using a rockfall drapery system, a layer of mesh that is laid along the slope to prevent loose rocks from tumbling to the ground below.

Drapery systems are made of wire mesh, cable netting, or high tensile steel, depending on the size of the expected rocks and the anticipated load that the mesh system will be expected to hold. The specifications for the material are based on calculations of the expected load, with double twist hexagonal mesh being the norm for rocks of 2 to 3 feet that slope at a 50 degree vertical angle; while cable/spiral rope net is used for larger rocks of 4 to 5 feet that overhang at a 35 degree angle. High-strength steel wire mesh falls between these two capabilities and is often combined with cable to hold in larger rocks and limit erosion.

How The Mesh Works

The mesh is positioned a specified distance from the surface of the slope. When rocks fall, they are guided by the curtain to a containment area below that is periodically cleaned out to prevent a backup of rocks. When the system is unsecured, it is self-cleaning as the mesh is attached at the top of the slope so that rocks fall between the mesh and the slope and exit at the bottom when they reach the ground.

Secured systems, on the other hand, are positioned closer to the surface, but have breakaway tethers throughout the curtain that release when rocks pass and support them.

Visual Mitigation For A Natural Look

Colorizing the mesh is considered visual mitigation. When it is not treated, it produces what is known as a “bridal veil” effect, as the mesh gives the illusion that is separate from the terrain.

To blend in with their surroundings and not detract from the natural beauty, mesh curtains are often powder coated. To promote re-vegetation of the slope, a layer of erosion control fabric can be placed behind the mesh to encourage the growth of grasses and small shrubs; the mesh can be colored the same as the expected vegetation to enhance the natural look.

Installing a drapery system utilizes a crane or helicopter to set the mesh in place. Using a crane is the most cost-effective approach, but for high slopes, difficult access, or large areas, using a helicopter is faster and less expensive.

Once a slope has been scaled to remove loose rocks, the crew, positioned on a man lift, installs anchors. Then, the mesh is either rolled out from the top of the slope or brought to the top from a staging area at the base.

Maintenance Of A Rockfall Drapery System

Once the drapery is in place, routine maintenance includes freeing trapped material so that the mesh does not become overloaded. While vegetation growing under the mass is welcomed, large shrubs or trees are removed to prevent their roots from competing with the effects of the mesh.

When considering the installation of a rock drapery system, choose an experienced company such as Triptych Construction, which has successfully covered mountains in Oregon, Idaho, and Washington with several million miles of wire mesh. For information about our projects or to obtain a quote, contact us at (541) 673-4903.